From June 14-15, Protective hosted local Birmingham high school students from Breakthrough Birmingham and other organizations for the Inaugural Leadership Academy at Protective Stadium.

Leadership Academy gives aspiring students an exclusive look at the business behind The World Games 2022 and provides inspirational messages of leadership from those who are making the Games a success behind the scenes. 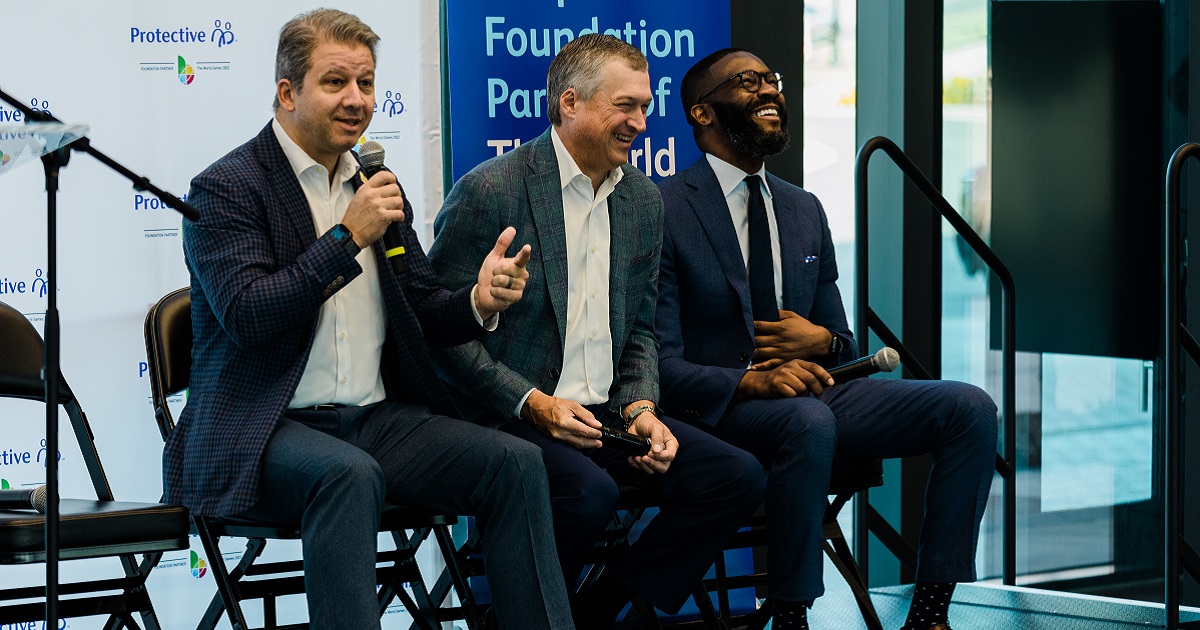 Mayor Randall Woodfin, along with The World Games 2022 CEO Nick Sellers and Protective Life’s Executive Vice President of Corporate Responsibility and Strategic Innovation Scott Adams, made opening remarks on the leadership that is driving The World Games 2022.

“We’re currently securing the city prior to the Games to make sure all of the fans, players, and dignitaries are safe. As mayor, safety is my number one priority,” Woodfin told the students.

Antonio Johnson Jr., an 11th grader from Ramsay High School, asked the panel what inspires them. Adams gave Johnson a response personal to his experience at Protective.

“The purpose of our company [Protective] and how we help people through our business and what we do through our work in the community is what inspires me,” Adams said. “I’m fortunate to work for a company that believes in purpose.”

Before the end of the panel, Sellers praised the Birmingham communities for their engagement with the Games and challenged the students to help better the city.

“It has been truly amazing to see the excitement the city and our communities have for this event,” Sellers said. “We’re all a part of the Birmingham family, and we hope you all go off to school and bring back your knowledge to help this city. The World Games 2022 are building self-confidence in Birmingham, for we know we can all do big things.” 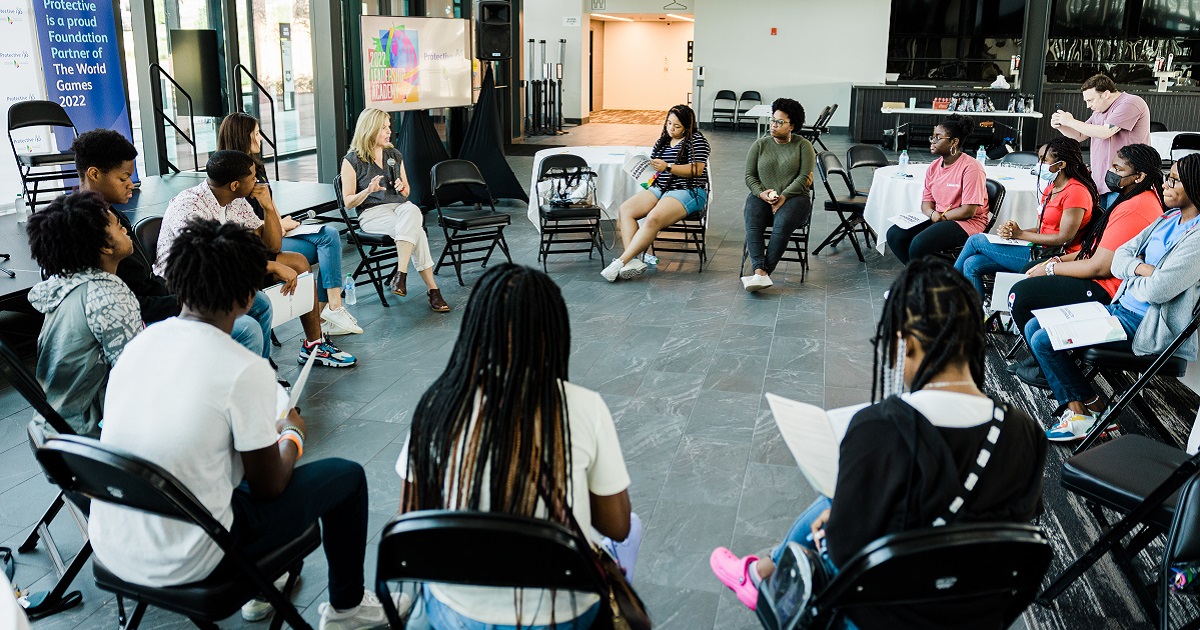 Lessons in sponsorship sales and activations

After the inspiring messages given by the previous panel, Dee Dee Mathis, Executive Vice President of Sales for The World Games 2022 in Birmingham, engaged with the students, giving them a crash course in sponsorship, sales and assets related to The World Games 2022.

Mathis used Protective as an example to explain promotions at CityWalk. 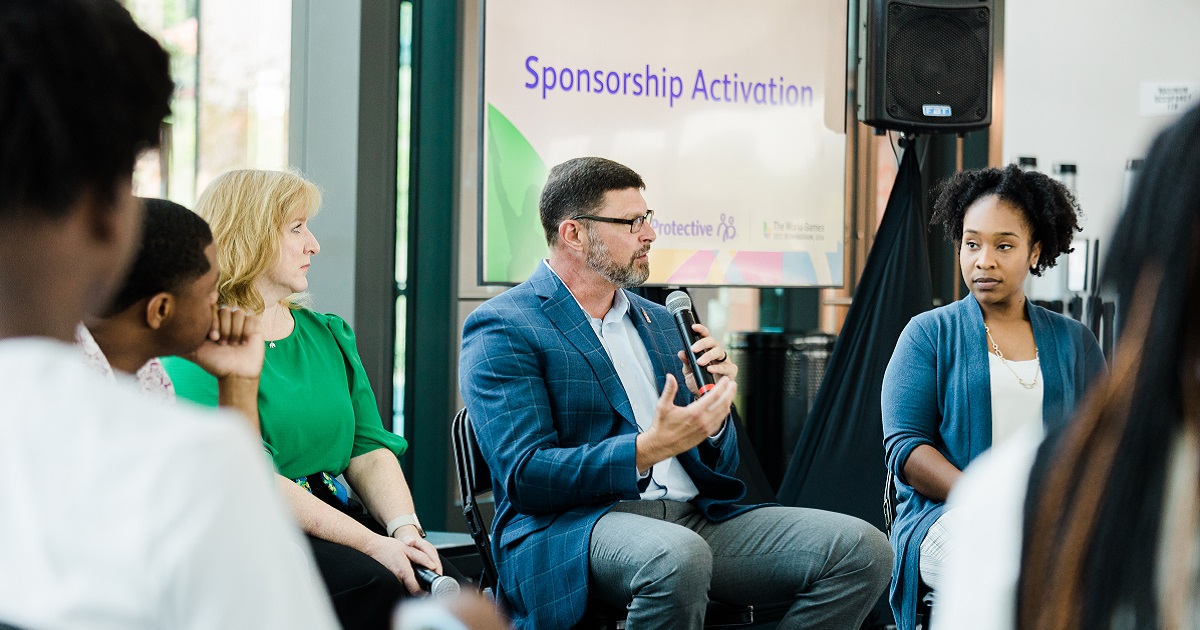 Protective’s Jennefer Meyer, Vice President of Brand, Consumer Communications and Social Engagement, along with Scott Smith, Director of Marketing for Coca-Cola Birmingham and Brittney Smith from Shipt, discussed sponsorship activations and shared their thoughts on what the Games mean for Birmingham.

“I love to see the sense of community in the city,” Scott Smith said. “This is something we all have to do together, and when these games are over, we are going to be left with a better Birmingham.”

Brittney Smith and Meyer both had strong words on what leadership means to them. Brittney Smith shared that, “Everyone is born with the ability to lead, and that leaders can be developed over a lifetime.”

“Leaders don’t ask ‘what’s in it for me?’” she said. “Leaders have empathy, and leaders take the time to invest in others, trying to bring out their gifts and what makes them great.” 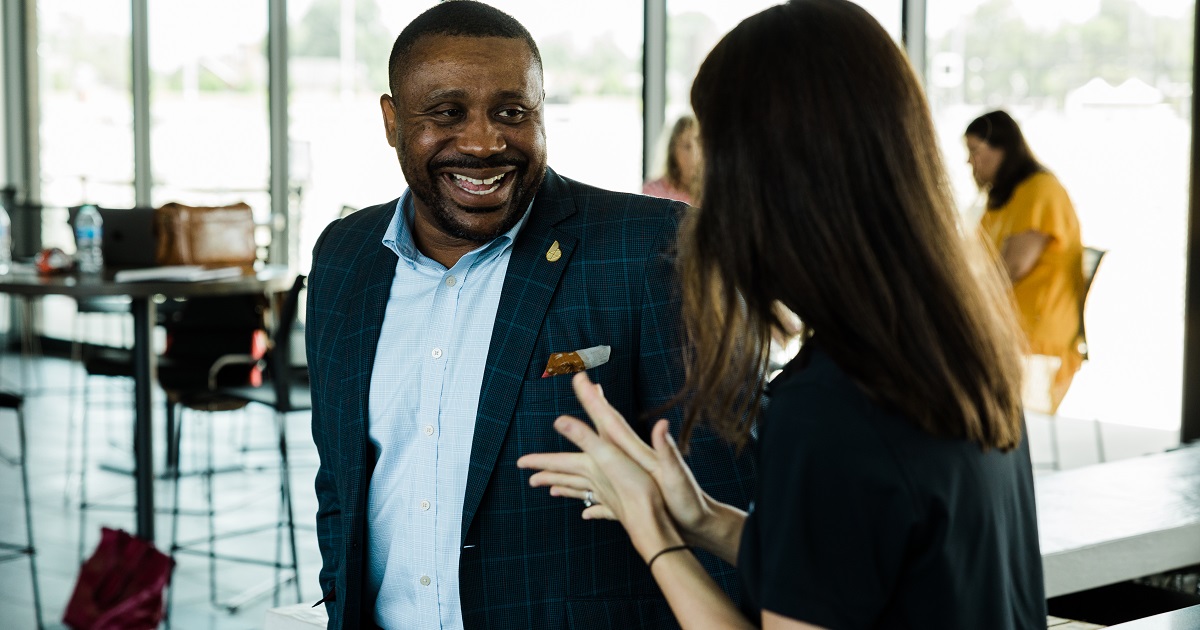 Birmingham on the world stage

Jonathan Porter, Chairman of The World Games 2022 in Birmingham, shared his insights with the students. Porter, selected from Alabama Power as the Chairman roughly six years ago, gave credit to the communities of Birmingham for the success the Games have experienced so far.

“This has been a true community effort to pull this off,” Porter said. “This is the biggest event in Alabama’s history, and it is the second biggest event in the Southeast with the exception of the 1996 Olympics in Atlanta.”

Porter had a compelling message for the students about the city of Birmingham and what it means for the area to have international exposure.

“There are many folks that have a negative viewpoint of Alabama and Birmingham, but now we have a chance to show that we are a vibrant, diverse and progressive city on a global stage,” he said. “This is an opportunity for us to be bigger than our past. We must focus on being historic, rather than focusing on our history.” Wrapping up the busy first day of panelists was Jay Kasten, Chief Operating Officer for The World Games 2022 in Birmingham. Kasten, who began his career working ticket sales and making nearly 300 calls per day for the St. Louis Cardinals, gave the students some unique pieces of information on the functional aspects of the Games.

“As the person in charge of conducting the Games and the planning leading up to the start, I have been able to work with the FBI and the Secret Service to ensure the safety of the Games,” Kasten said. “In fact, according to the Special Event Assessment Rating (SEAR), this is Alabama’s first Level 1 event, which is comparable to a Super Bowl from a security perspective.” Edwards is particularly excited about the merchandising opportunities the Games are bringing to the city.

“We are working with a grassroots movement called World of Opportunity, an effort to connect with the community and give local small businesses a chance to retail products associated with The World Games 2022,” he said. 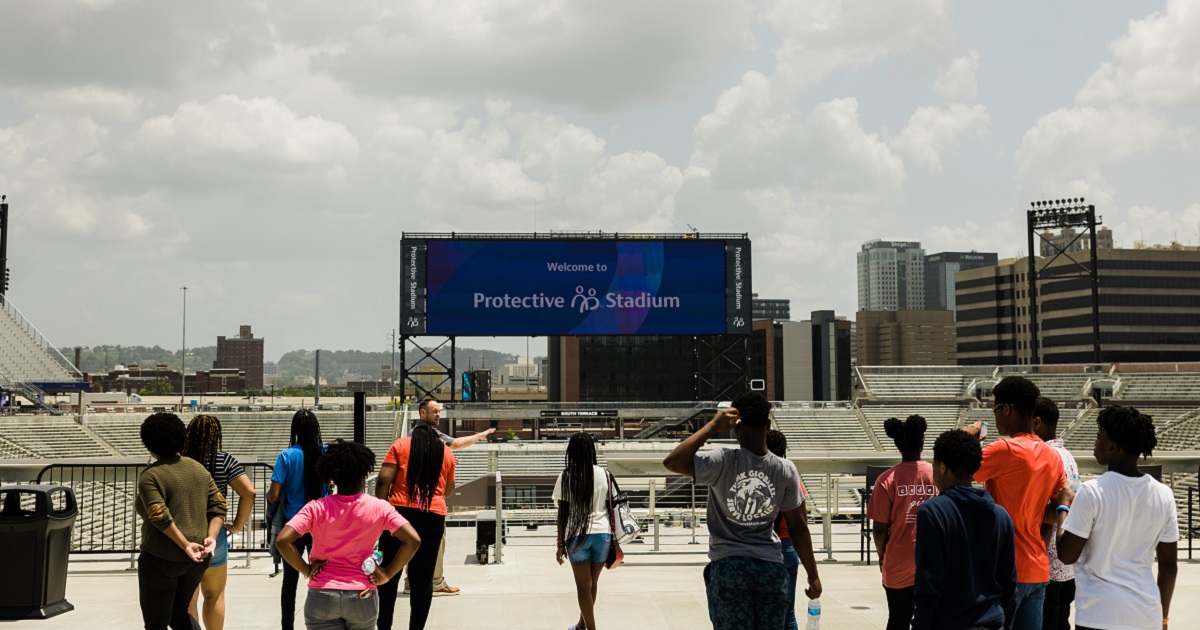 As part of Leadership Academy, students took an exclusive tour of Protective Stadium. The students visited places that few fans have seen, such as the locker rooms, press conference room and press box. After the tour, the students played cornhole and sumo wrestling, both activities brought in by Shipt. Vulcan and Vesta, official mascots for The World Games 2022, also made appearances.

Students also toured the nearly completed CityWalk under I-20. CityWalk will be home to some of Protective’s most anticipated events during the Games, like the 360-degree photo booth, Athlete of the Day presentations and autograph booth.

After a brief visit to CityWalk, the students visited the newly renovated Legacy Arena with Bobby Breedlove, Director of Event Management for the BJCC. Following the tours, the students heard from Kathy Boswell, Vice President of Community Engagement for The World Games 2022. Boswell allowed the students to ask her questions while giving them powerful answers on what it means to leave a legacy.

“What is your legacy moment?” Boswell asked. “Legacy moments can go up, or they can go down, much like being a good student or a bad student. Now, you don’t always have to make an A, but you must know that you did your absolute best.” Boswell closed with one more moving remark that left an impact on everyone in the room.

“Do you still feel worthy when you aren’t having that pat on the back?” she asked. “That’s what really matters.”

Bringing The World Games 2022 to life

LeRoy, who leads the first Black-owned company to produce a worldwide sporting event, proudly explained how the opening ceremonies for the Games will focus on the state of Alabama, but particularly the city of Birmingham, highlighting both its past and future.

Reynolds and LeRoy previewed to the students multiple videos and graphics set to broadcast during the 10-day event and discussed how the ceremonies will be produced. LeRoy listed artists like Nelly, Bootsy Collins, Sara Evans and others who will perform during opening and closing ceremonies. Reynolds also touched on how he and LeRoy have worked together and gave the students an up-close look at how the ceremonies will broadcast to the world through a global television command center stationed in Birmingham.

Reynolds was especially excited about the 3,100-mile journey of the American flag on its way to Birmingham. The flag, carried by military veterans, will make its grand appearance during the opening ceremonies of the games. 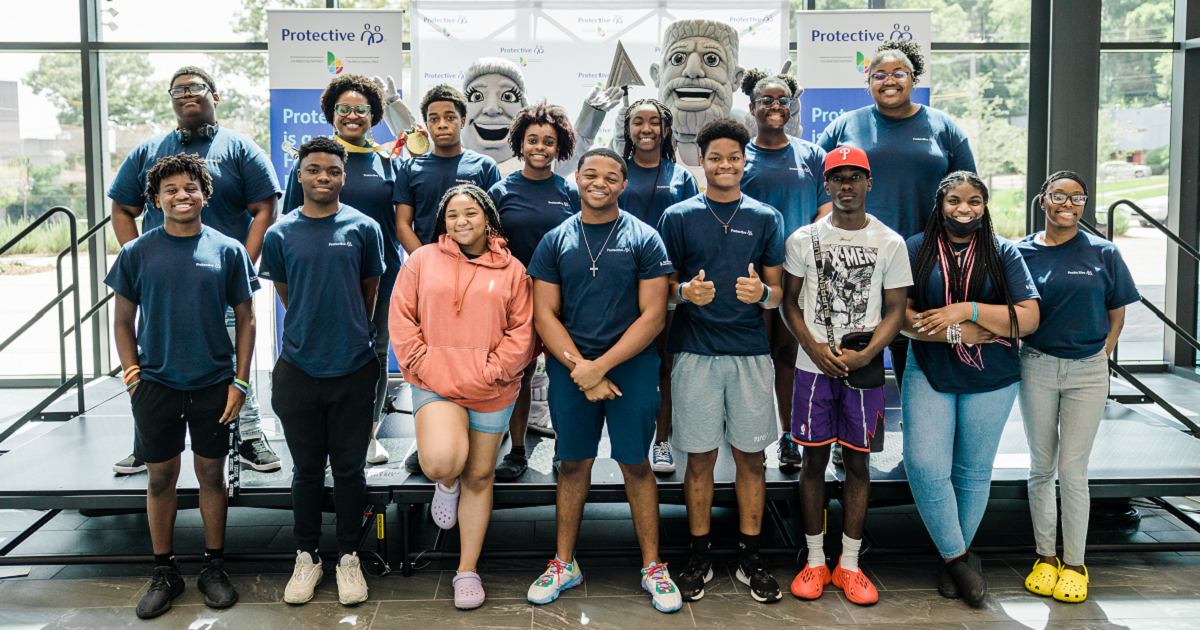 Leadership Academy ended with each student receiving a certificate of graduation and experiencing their own medal moment donning an authentic gold medal for The World Games 2022 in a picture with Vulcan and Vesta.

Protective is proud that Leadership Academy provided the students with a unique opportunity to learn about The World Games 2022 while also giving them valuable insights they can use on their paths to becoming the city’s next generation of leaders.

Learn more about Protective and The World Games 2022. 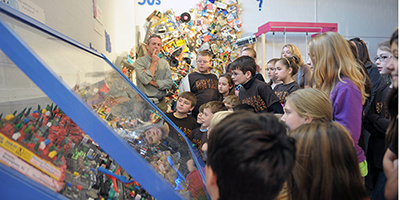